THE DECEPTION OF ROMAN CATHOLICISM 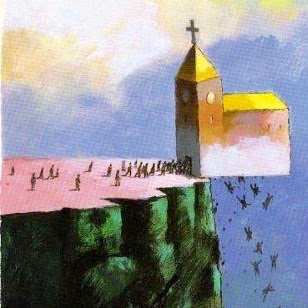 The Roman Catholic church teaches the deity of Jesus Christ, the Trinity, the virgin birth and the bodily resurrection and return of Christ to the earth.

However, most Roman Catholics when asked “Are you a Christian?” they will normally reply, “I’m a Catholic.” They are right to do so because there are clear and fundamental differences.

A German monk named Martin Luther found that salvation didn’t come through anything he did (good works), but simply through trusting in the finished work of the cross of Jesus Christ. He listed contradictions between what the Scriptures said and what his church taught and nailed his “95 thesis” to the church door in Wittenberg, Germany. He became the first to “protest” what he saw as errors of the Roman church.

The Roman Catholic church traces its history back to the church of the first century but the Protestant church asserts that Catholicism actually had a later beginning, in the fourth century, when Constantine unified the Roman Empire by merging paganism with Christianity.

The Roman catholic church maintains that the true church is built on Peter, whom they believe was the first “pope.” However, Peter himself denied this fact, maintaining that Jesus Christ is the Rock and the Chief Cornerstone of the church.

Wherefore also it is contained in the scripture, Behold, I lay in Sion a chief corner stone, elect, precious: and he that believeth on him shall not be confounded.

Unto you therefore which believe he is precious: but unto them which be disobedient, the stone which the builders disallowed, the same is made the head of the corner,

And a stone of stumbling, and a rock of offence, even to them which stumble at the word, being disobedient: whereunto also they were appointed.

And did all drink the same spiritual drink: for they drank of that spiritual Rock that followed them: and that Rock was Christ.

Biblical Christianity and Roman Catholicism share similar beliefs that God is the Creator of all things.

For by him were all things created, that are in heaven, and that are in earth, visible and invisible, whether they be thrones, or dominions, or principalities, or powers: all things were created by him, and for him:

And he is before all things, and by him all things consist.

Biblical Christianity and Roman Catholicism share similar beliefs that Jesus Christ is the Son of God, born of a virgin, who suffered and died for our sins, and rose again on the third day.

For I delivered unto you first of all that which I also received, how that Christ died for our sins according to the scriptures;

And that he was buried, and that he rose again the third day according to the scriptures:

Christians belief of Heaven and Hell

The Bible speaks clearly of the existence of Heaven. It describes a place in which sadness, pain, and death end.

And God shall wipe away all tears from their eyes; and there shall be no more death, neither sorrow, nor crying, neither shall there be any more pain: for the former things are passed away.

Hell is also spoken in the Bible. It is a place of torment or misery and eternal punishment of the wicked after death and complete separation from God.

In flaming fire taking vengeance on them that know not God, and that obey not the gospel of our Lord Jesus Christ:

Who shall be punished with everlasting destruction from the presence of the Lord, and from the glory of his power;

According to the Catholic Catechism, upon death each person will begin eternal life. After being judged by Christ each individual will gain “entrance into the happiness of heaven, immediately or an appropriate purification, or entry in the eternal damnation of hell” Heaven is described as “the state of supreme and definitive happiness those who die in the grace of God and have no need of further purification are gathered around Jesus and Mary, the angels and the saints”

In addition, Catholics believe in a “holding place” called Purgatory, for which there is no biblical basis. It is believed to be an intermediate stage that is used to purify souls that will eventually go to Heaven, but that still have some temporal restitution they must make. Purgatory is not in the Bible. Any true Christian must be guided by the light of the Scripture and the Bible only makes mention of two eternal realities not three; eternal life in the presence of God Almighty (Heaven) or eternal damnation completely separated from God (Hell).

Who being the brightness of his glory, and the express image of his person, and upholding all things by the word of his power, when he had by himself purged our sins, sat down on the right hand of the Majesty on high:

The doctrine of Purgatory misleads people into thinking they can somehow be made right with God after this lifetime. Scripture clearly warns us: There are no second chances.

And as it is appointed unto men once to die, but after this the judgment:

Christian belief of Sin and Salvation

Sin is transgression/violation against God’s Holy Law. An act of rebellion against Him.

Whosoever committeth sin transgresseth also the law: for sin is the transgression of the law.

The Scriptures clearly teach that the only way we could ever be justified is by His mercy, not by the bribery of good works. Eternal life is not something we can earn, but is a free gift from God to all who repent, believe and trust the Saviour Jesus Christ.

For by grace are ye saved through faith; and that not of yourselves: it is the gift of God:

Not of works, lest any man should boast.

Jesus said that we must be born again or we will not enter Heaven. The Scripture teaches a sinner needs to repent, believe and trust in Jesus Christ alone to be saved.

Jesus answered and said unto him, Verily, verily, I say unto thee, Except a man be born again, he cannot see the kingdom of God.

Nicodemus saith unto him, How can a man be born when he is old? can he enter the second time into his mother's womb, and be born?

Jesus answered, Verily, verily, I say unto thee, Except a man be born of water and of the Spirit, he cannot enter into the kingdom of God.

Marvel not that I said unto thee, Ye must be born again.

The Vatican denies what the Bible says, that eternal life is not something we earn, but is a free gift from God to all who repent and trust the Saviour. They deny this doctrine and pronouncing the curse of God upon anyone who believes that eternal life is through “faith alone”. Roman Catholic church teaches that we can earn our salvation, calling Heaven God’s “reward for good works.”

The Vatican teaches that salvation comes only through the Roman Catholic church, and because its works-based, salvation can be lost through sin and is never assured in this life. They believe that the first step in salvation is to be baptized. Tragically, the Roman Catholic church maintains that in baptism (sprinkling) the new birth takes place. (The baby cannot repent of sins committed, he is not saved by baptism and therefore is not born again.) The sacrament of penance is required to receive forgiveness of sins committed after baptism. Acts of penance vary but include prayer, saying the rosary, reading Scripture, saying a number of “Our Father” or “Hail Mary” prayers, doing good works, and fasting.

Not by works of righteousness which we have done, but according to his mercy he saved us, by the washing of regeneration, and renewing of the Holy Ghost;

Roman Catholics bow down to and give homage to statues of the saints, angels, images of Mary and Jesus, etc. Bowing down to anything is a direct violation of the Ten commandments - which they officially accept as God’s law? You will find that the second of the Ten Commandments has completely been removed which is against idolatry. The third commandment then becomes the second and the fourth became the third and so on. The Roman Catholic church then took the Tenth Commandment (found in one verse and dealing with one of the subject of covetousness – see Exodus 10:17), broke it in half and made it into the Ninth and Tenth Commandments.

Here are the Ten Commandments as listed on the official Vatican website:

1.I am the LORD your God: you shall not have strange God’s before me.

2.You shall not take the name of the LORD your God in vain.

4.Honor your father and your mother.

5.You shall not kill.

6.You shall not commit adultery.

7.You shall not steal.

8.You shall not bear false witness against your neighbour.

9.You shall not covet your neighbour’s wife.

10.You shall not covet your neighbour’s goods.

These are the Ten Commandments in the Holy Bible

3.    Thou shalt not take the name of the Lord thy God in vain; for the Lord will not hold him guiltless that taketh his name in vain.

5.    Honour thy father and thy mother: that thy days may be long upon the land which the Lord thy God giveth thee.

7.    Thou shalt not commit adultery.

9.    Thou shalt not bear false witness against thy neighbour.

While Roman Catholics acknowledge Holy Scripture as a source of authority and doctrine, they give equal weight to tradition because Salvation does not depend on a person’s repentance and faith in the saving work of Jesus Christ, according to the Catholic church even those who have never heard of Jesus can be saved- even if they follow another religion.

Again, the Bible is clear that forgiveness of sins does not depend on our own efforts, but only on what Christ has accomplished for us on the cross. Yet, like the Catholic church, much of the traditional Protestant church has moved away from the great truth upon which it was founded. It is simply to say that the gospel is good news for both Catholic and Protestant - eternal life is freely available to all who do what the Scriptures command.

Repent, believe and trust in Jesus Christ alone to be saved.

That if thou shalt confess with thy mouth the Lord Jesus, and shalt believe in thine heart that God hath raised him from the dead, thou shalt be saved.

For with the heart man believeth unto righteousness; and with the mouth confession is made unto salvation.