THE DECEPTION OF ATHEISM 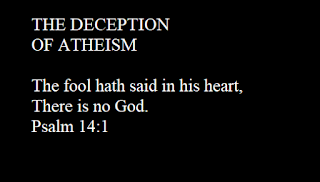 Atheism belief of "Who is God"?

All atheists disbelieve in all gods. Atheists believe no one has yet provided enough evidence to warrant a belief in god(s) or in Christian context, God. There is no reason to believe that a supernatural intelligent Creator exists.

[There are billions of reasons to believe in a supernatural intelligent Creator. From the order of DNA, to every atom, to the amazingly designed tiny fleas, to the massive elephants, to the sun, moon and its circuits, to the millions of stars and the entire universe, there is incredible order.

If you were walking along a beach and saw words written in the sand that said, "Johnny, make sure you come home at 5:00 pm for dinner. See you then. I love you. Mum, "Could you ever believe that the order of the words happened by a random process an accident? Could you conclude that perhaps the incoming waves left the words in the sand? Only a fool would think so. Their very order,

information content, and constructed logic tell you that the message was written by an intelligent mind.]

God is a Spirit. We can see the attributes of God through His creation. Since God is the Creator, we can see His work clearly. Creation shows us His power and order. It is impossible for anyone to look at creation and not see God's creative power. No one can plead ignorance of God. We can trace God from the world around us.  We can see His power and majesty in creation.

For the invisible things of him from the creation of the world are clearly seen, being understood by the things that are made, even his eternal power and Godhead; so that they are without excuse:

Atheism belief of "Who is Jesus"?

"A relatively enlightened man for his times. Preached simple things such as brotherly love. Likely a real man. Some, like I, think his simple lessons were wrapped to control the gullible masses. (which still works)."

"The carpenter from Bethlehem existed, in all likelihood. He went around giving sermons, but he was not the son of God and he did not speak for God. My father, also an atheist, has speculated that Jesus himself was an atheist and preached his doctrine to give comfort to the minds of people on Earth. I am not sure about this."

[ In such sermon, Jesus gave the ultimate challenge to sceptics: “He that hath my commandments, and keepeth them, he it is that loveth me: and he that loveth me shall be loved of my Father, and I will love him, and will manifest Myself to him."(John 14:21). To find out with 100 percent absolute certainty that Jesus is God in the flesh, atheist can simply obey His command to repent and believe the gospel, and He will reveal Himself to them. Then they will know God exist, because they will know Him.]

2. Christian belief of "Who is Jesus"?

The Bible tells us that Jesus is God, eternally pre-existent before the "incarnation. He is “the image of invisible God". He created a body for Himself and became a man to suffer and die for the sin of the world.

Who is the image of the invisible God;

And he is the propitiation for our sins: and not for ours only, but also for the sins of the whole world.

Atheism belief of Heaven and Hell

"I don't believe God exists. I do not believe in the Bible as the literal inerrant word of God. Thus, Heaven and Hell are, in my opinion, much like God: a feel-good idea that swims in the minds of people, but has little bearing in reality. It's also a nifty way to control people through fear, but I digress. Personally, I think the idea of Hell points to exceptional cruelty. An eternity of pain? That's pure evil. Heaven also sounds pretty boring. I'd rather reincarnate (but alas, I don't believe in that either)."

[The question is often asked, "How could a loving God create Hell?" Think of how a civil judge, who turned a blind eye to murder, would be corrupt and should be brought to justice himself. If the Judge of the Universe is not going to bring murderers to ultimate justice, then He is corrupt. He would be wicked. In the 1990s in the US there were 200,000 murders. Statistics show that during those ten years half of those homicide crimes were unsolved. That means that 100,000 people got away with murder. When we use the Law to show that God is not only loving, but that He is perfect, holy, just and good, we end up saying, "How can there not be a Hell?"]

3.Christian belief of Heaven and Hell

We will be free from all trouble and sorrow. All tears shall be wiped away and no remembrance of former sorrows shall remain. God Himself, as our Father, shall wipe away the tears of His children.

And God shall wipe away all tears from their eyes; and there shall be no more death, neither sorrow, nor crying, neither shall there be any more pain: for the former things are passed away.

This will be the day, when all shall be judged. The appearance of the Judge and that is the Lord Jesus Christ who puts on such majesty and judge righteously. Woe to the wicked, whosoever was not written in the book of life, for they shall perish in hell forever and ever.

And whosoever was not found written in the book of life was cast into the lake of fire.

Atheism belief of Sin and Salvation

“I do not believe there is such a thing as sin, mainly because I do not believe that the Bible is anything other than a load of stories. If there is sin, then there must be moral absolutes, which do not exist because our stance on morality has changed over time.” "Seeing as I do not believe in an afterlife, the concept of salvation seems ridiculous and unnecessary to me.”

[There’s a big problem when an atheist who denies that sin (evil) exists. All you have to do is ask if murder is wrong, and if he says that it’s not, keep on asking if what Hitler did was wrong, or if paedophilia is wrong. You will soon find that he has a moral boundary regarding what is right and what is wrong. God’s moral standard is infinitely higher.]

4. Christian belief of Sin and Salvation

We believe that sin is a transgression / violation against God's Holy Law (The Ten Commandments). An act of rebellion against Him.

Whosoever committeth sin transgresseth also the law: for sin is the transgression of the law.

God loves us so much that He sent His Son Jesus Christ to be born on earth and die on the cross to save us from our sins. There is nothing we can do to make us good enough for heaven. All we have to do is repent, believe, and trust in Jesus Christ alone as our Lord and Saviour.

For God so loved the world, that he gave his only begotten Son, that whosoever believeth in him should not perish, but have everlasting life.

How can we know that God exists? We cannot see Him, hear Him, touch, taste, or smell Him. Common sense tells us that creation is absolute 100 percent scientific proof that there is a Creator. We cannot have creation without the Creator. We don’t need faith to believe in the Creator. All we need is eyes that can see and a brain that works.

The same is true with God:

But without faith it is impossible to please him: for he that cometh to God must believe that he is, and that he is a rewarder of them that diligently seek him.